Thanks to good fossil records, we know that turtles are some of the oldest vertebrates on Earth. They made their appearance during the late Triassic period, about 250 million years ago. They are part of the reptile family that includes crocodilians (alligators and crocodiles), who are their closest relatives, the dinosaurs, who they lived alongside, and birds.

You read that correctly. Current studies show that genetically, birds are most closely related to crocodiles, turtles, and dinosaurs. But you have always suspected your Mr. Tweetie was hiding something, haven’t you? 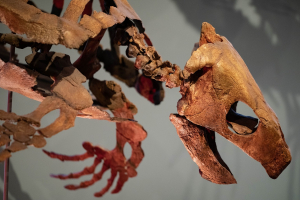 Image by Icewall42 from Pixabay

You might look at sea turtles and assume turtles have always been aquatic, but the earliest turtles lived on land. At first, they had expanded ribs, not the fully formed shell we associate with turtles today. The early turtles include:

In the 250 million years that turtles have been on Earth, they have never been in as much danger of extinction as they are today. We hope that as you learn more about ancient turtles, you will also learn how to help turtles today.

Wood Turtle in the Bus Rescuing Anoles
Scroll to top