Our Dancing Turtle wildlife rehabilitators, Jen and Debbie, agree that snapping turtles are among our favorite patients. Although extra care must be taken to avoid their powerful jaws when treating them, snapping turtles tend to be friendly and relaxed while recovering. They seem to appreciate receiving care, even if they are just a bit snappy. 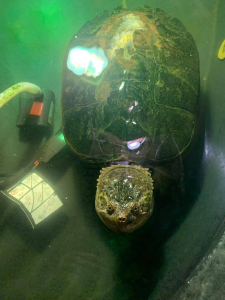 This snapping turtle was injured by a car. While snappy during her initial treatment, she is relaxed and curious now.

The common snapping turtle (Chelydra serpentina) is native to New York. Snapping turtles are found from southern Ontario in Canada all the way to Florida and west to the Rocky Mountains. Snapping turtles live in rivers, lakes, marshes, shallow ponds, and streams. They may also live in brackish environments, where rivers and streams meet salt water.

Snapping turtles spend most of their time in the water and bask by floating on the surface with only their carapaces exposed. Here, in the northern part of their range, they may also bask on fallen logs, especially during the spring.

They are most active at dawn and dusk. While they are known for their snap, when snapping turtles are encountered in the water, they are docile and will most likely slip quietly away. Occasionally a snapping turtle will approach a human in the water out of curiosity, but rarely aggressively. 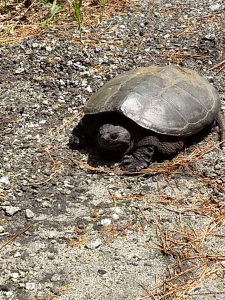 She put up a fight, but this snapping turtle was successfully helped across a busy road.

From late May until early July, female snapping turtles travel to find sandy soil in which to lay their eggs, often some distance from the water, which is when you are most likely to encounter one on land. Walking is awkward for these water dwellers, and they tend to react defensively when approached. Unfortunately, their travels often take them across roads where they may be hit by cars. The snapping turtle’s defensiveness makes it harder to help them cross or to aid them when injured, but it can be done.

In the summer of 2021 we had a record number of injured snapping turtle intakes. We are happy that we could care for so many, but we could not do it without compassionate people to bring them to us. We appreciate those who are willing to help injured snapping turtles and have included instructions for handling them on our injured turtle response page.