The U.S. Environmental Protection Agency classifies wetlands as areas where water either covers the soil or is present at or near the surface of the soil for at least part of the year. The water is often groundwater from an aquifer or spring. A wetland may also be filled by water from a nearby river or lake or, in coastal areas, by the ocean tides. Basically, wetlands are wet places. 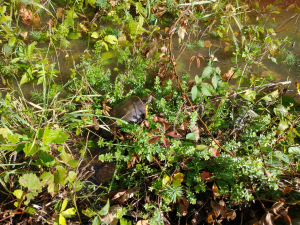 This painted turtle was rehabbed and released to her wetland habitat in 2021.

While some wetlands are permanently under water, others may flood seasonally. The depth and duration of this seasonal flooding varies. What is important is that, in each wetland, the presence of water determines the biological, physical, and chemical characteristics of the land and creates a distinct ecosystem.

Plants that live in wetlands are uniquely adapted to watery soil and vary from mosses and grasses to trees. A wide variety of animal species live in wetlands, too. Birds that frequent wetlands for protection and food include ducks, geese, kingfishers, and sandpipers. Mammals like otters and beavers rely on wetlands for food and shelter. Wetlands are home to many types of fish and – our favorites – reptiles and amphibians such as frogs, salamanders, snakes, and turtles.

Wetlands exist in many climates and are found on every continent except Antarctica, both along coasts and inland. The largest wetlands in the world include the Amazon River Basin in South America and the Hudson Bay Lowland in Canada. The world’s largest protected wetland, Llanos de Moxos in Bolivia, is more than 17 million acres, about equal in size to North Dakota.

Wetlands are essential ecosystems. In addition to providing homes for many plant and animal species, they are giant sponges that limit the effects of flooding from heavy rain. Coastal wetlands absorb storm surges to protect fragile beaches and shore communities. As storms worsen due to climate change, wetlands may save us all.

Interested in learning more about wetlands? Check out our Wild Wetlands educational outreach program. We would love to bring Wild Wetlands or one of our other programs to your school, library, or club. Contact us to find out how.