In an earlier post you learned about what wetlands are and why they are important. The Adirondack Park has marshes, peatlands, and swamps you can explore. 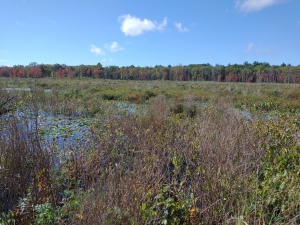 This marsh, which surrounds a pond, was the release site for a turtle hit by a car nearby.

Marshes are the deepest – up to six feet – and are the most biodiverse of the Adirondack wetlands. Marshes are found around ponds and lakes and along the slow-moving backwaters of rivers. Plants such as grasses, reeds, rushes, water lilies, and loosestrifes grow well in the nutrient-rich soil. Deer may be spotted along the edges of marshes and otters may be seen playing in the water, but there is an abundance of other life too. Turtles and frogs inhabit marshes. Many kinds of are found in marshes, too, including red-winged blackbirds and herons.

In peatlands, conditions are too cold and wet for plants to decompose; instead, they accumulate as peat soil. There are two types of peatlands in the Adirondacks: bogs and fens. Bogs are isolated from other water sources and are, therefore, dependent on rain. The peat in bogs tends to be acidic and nutrient poor. There are some plants that are happy in bogs, though, such as Tamaracks, Black Spruce, and Bog Laurel. Some orchids thrive there, as do pitcher plants and sundews, who have evolved to eat insects. And there are plenty of insects in bogs which bring in the birds, such as warblers and cedar waxwings, especially when they are feeding young. Some Adirondack bogs are over one thousand acres in size.

The other peatland you might find in the Adirondacks is a fen. Fens also have peat soil but get water from the surrounding watershed and are less acidic. Fens host a greater variety of plants than bogs. Wood frogs are often seen in and around fens.

The final Adirondack wetland is the swamp. Swamps are dominated by conifers and shrubs and are seldom more than a few inches deep. Because they are shady, plants like ferns and mosses are happy, as well as some shade-hardy wildflowers.

Interested in learning more about our Adirondack wetlands? Check out our Wild Wetlands educational outreach program. We would love to bring Wild Wetlands or one of our other programs to your school, library, or club. Contact us to find out how.